Joseph Bruchac (Abenaki) is the author of more than 130 books for children and young adults. His beautiful books (folk-tales, poetry, contemporary & historical fiction, post-apocalyptic sci-fi & more) explore various aspects of Native American life and history, from being an urban Native to stories about Navajo Code-Talkers. Bruchac is a vital force in Native American children’s literature and his contributions to the field are numerous. Coming this Fall from Dial Books, TWO ROADS is Bruchac’s return to middle grade historical fiction and I have the pleasure of hosting a cover reveal for the title.

It’s 1932, and twelve-year-old Cal Black and his Pop have been riding the rails for years after losing their farm in the Great Depression. Cal likes being a “knight of the road” with Pop, even if they’re broke. But then Pop has to go to Washington, DC–some of his fellow veterans are marching for their government checks, and Pop wants to make sure he gets his due–and Cal can’t go with him. So Pop tells Cal something he never knew before: Pop is actually a Creek Indian, which means Cal is too. And Pop has decided to send Cal to a government boarding school for Native Americans in Oklahoma called the Challagi School.

At school, the other Creek boys quickly take Cal under their wings. Even in the harsh, miserable conditions of the Bureau of Indian Affairs boarding school, he begins to learn about his people’s history and heritage. He learns their language and customs. And most of all, he learns how to find strength in a group of friends who have nothing beyond each other.

Enjoy an excerpt below:

Chapter One: Keeping Up

The red road stretches out before us, a long ribbon of light.

I am the right size for my age, which is twelve—this being nineteen thirty-two in the year of our Lord. I can run as fast as the Dickens. But when it comes to marching I always fall behind. Despite Pop’s limp, he always gets a few steps ahead of me.

I cannot help but sigh.

Pop doesn’t hear that. Though he can still catch the songs of the birds in the trees above us—like the redbird he pointed out a mile back—real low noises escape his ears. It has been that way since the sixth of June in ‘18 when he was partially deafened by the booming of the big guns.

We keep marching along. I’m doing a better job now of keeping up. I don’t mind walking like this, mile after mile, just as long as it doesn’t start my father remembering.

Pop looks up at the sun. “It was hot like that day. It was about this time,” he says. “Exactly 3:45 P.M.” There’s a faraway look on his face now. He’s telling the story to himself, almost unaware of me listening.

“‘Over the top and take that wood,’ General Hartford orders us. And then the whistle blares. So over the top we go. Every one of us as green as grass.”

It’s the place where Pop always pauses. Sometimes we’ll walk as much as a mile before he says more.

“And then the Devil’s Paintbrushes opened up and down we went, like a wheatfield being mowed.”

Another silence as another mile passes.

“No,” he says. “Not like wheat nor rye. Mown grass does not bleed or make the ground so slippery you can’t hardly stand.”

He pauses, shakes his head as if trying to wake up from a bad dream. Then he starts walking again. That faraway look is gone from his face. I’m not sure he even knew that look was there. He’s finished that story for now, leaving it behind,

Which is what I would like to do. But almost as soon as he started the story, as it sometimes happens, something took over. This happens to me now and then. I’m drawn backwards. I find myself in the middle of someone else’s life. Not remembering it or seeing it. But living it moment by moment.

I’m no longer walking down a southern road in the here and now of 1932. It’s years ago–over there. I’m someone else in full uniform. Crouched next to my father in the muddy trench. I’m holding a gold pocket watch in my left hand, looking at the letters inscribed on the back.

My heart’s pounding like a drum as we wait for the signal. Sweat is beading my forehead. That loud shrill whistle sounds. We scramble up over the top, stumble forward through the broken strands of barbed wire, the half-buried bodies of men who took part in the last wave. We leap over craters left by shells. The only sounds are heavy breathing, the thudding of feet on the frozen ground, the rattle of our canteens against the metal buckles of our belts.

Then the Huns open up with their MG08 machine guns–the Devil’s Paintbrushes. Bullets hiss around around us, moving faster than the speed of sound, followed by the cracking of the air. Men start bowing their heads and dropping to their knees as the earth beneath us is painted with blood. Their blood. Our blood. My father falls, but I pick him up, throw him over my shoulder to carry him. . .

I’m so lost in that vision of a France I’ve never really seen that I’ve been in a daze, not even seeing my feet crunching the red roadside gravel.

I run my hands back through my long hair, waking myself back up to the real world.

That makes Pop chuckle. It’s not hard for me to amuse Pop unless he is in one of his black moods. Then nothing will bring the light of a smile to his sun-browned face, even though I have to try.

That’s the deal, as Pop puts it. All we have is each other.

And without further ado… 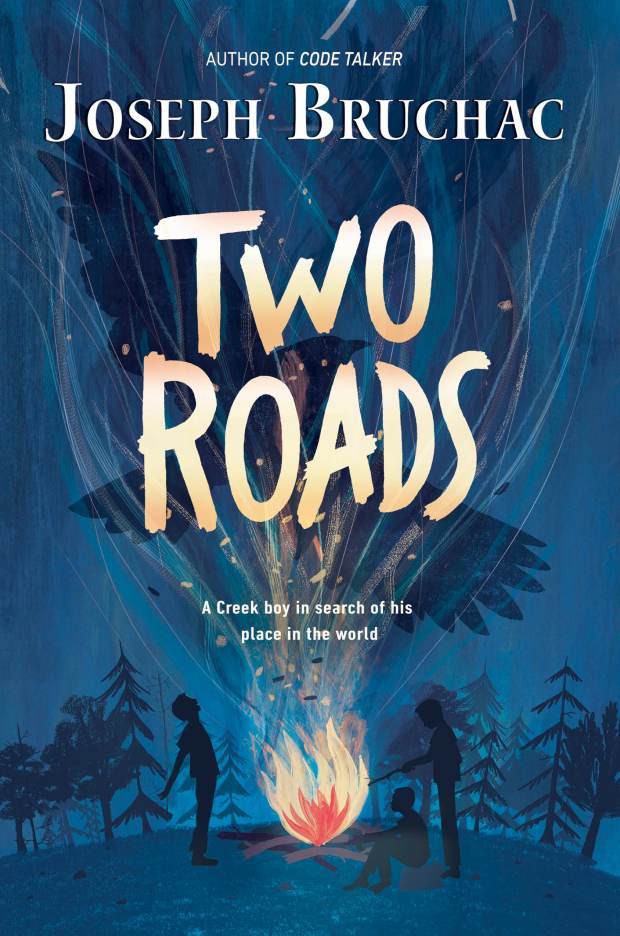 TWO ROADS publishes October 23rd, 2018 and will be available in hardcover and ebook formats. Look for it online, at your local indie bookshops, and at your local libraries!

This summer, I’m moderating a panel at ALA Annual in New Orleans titled NATIVE YA: CONTEMPORARY INDIGENOUS VOICES AND HEROES FOR THE 21RST CENTURY AND BEYOND featuring Joseph Bruchac, Cynthia Leitich Smith, Dawn Quigley and Eric Gansworth. If you’re coming to ALA, please stop by and hear Joseph discuss TWO ROADS and the importance of Native American young adult literature!

Thank you to Dial Books and Penguin Random House for the opportunity to host this cover reveal. 🙂