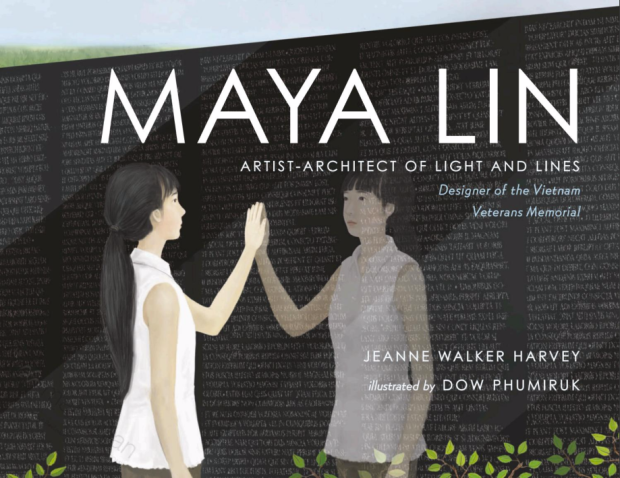 This Women’s History Month, I’m sharing an upcoming (May 2017) picture book about the talented and influential, Maya Lin.

Maya Lin grew up in a creative household; her father a clay artist and her mother a poet. She was encouraged by her immigrant parents to dream and create. Nature was very important to young Maya and would continue to be influential as she grew and developed as an artist and architect.  When she was a senior in college, her understanding of nature, space, design and sensitivity would lead her to win a design competition for the Vietnam Veteran’s Memorial in Washington, D.C.

Lin received a great deal of push back for her design but held her ground. She showed the world her strength and stood her by creation. What’s special about the memorial is its symbolism, seamless integration into nature and how it makes those who experience it feel. Her art is meant to be experienced; the reflective granite of the memorial, with its thousands of names, elicits reflection.

Phumiruk’s soft, detailed digital illustrations suit this story. I love the first spread of the book where we see the mossy green “Lizard’s Back” hill Lin explored with her brother as a child. I like how Phumiruk uses an aerial perspective for a few key spreads. Seeing Lin from above, surrounded by nature & as she admires the architecture of her college library, highlights how much she was affected by her surroundings as a young artist. The cover of the book is striking too; Maya Lin gazes at her creation, seeing herself reflected while reading the name of a friend’s father who died in the war. The cover illustration reminds me just how important “mirrors” are for children of color and native children.

I really enjoy biographies for children that tell the lives and experiences of people who are living; children take a lot away from the fact that the person is STILL out there dreaming and making change. There simply aren’t enough books about Asian American creatives, let alone Asian American female creatives and I’m glad for this one. Walker Harvey’s great storytelling and Phumiruk’s lovely illustrations make this an important book to add to your collection. 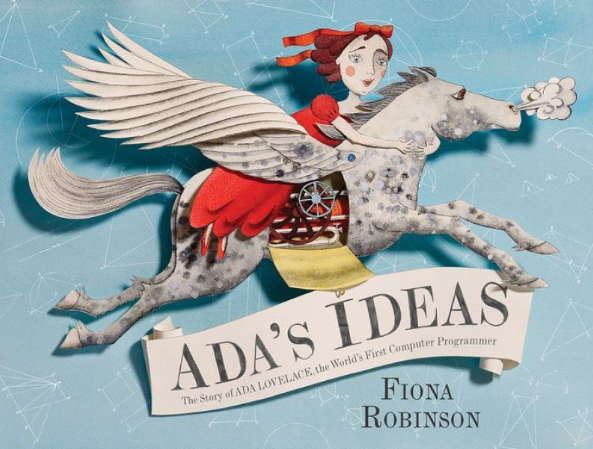 I love that the cover says “the World’s First Computer Programmer” which establishes the fact that Ada Lovelace was and always will be a big deal.

We’ve been blessed with quite a few recent picture books (all written and illustrated by women) about Ada Lovelace. I’ve already reviewed Ada Byron Lovelace and The Thinking Machine which is also very good and pairs well with this book.

Ada Lovelace grew up in her mother’s world of numbers and manners. She had a strict academic regimen and was expected to stick to it. Luckily, she was rich and grew up during the Industrial Revolution where she was distracted by modern technology. Ada started to invent things with her mathematical and imaginative mind! Unfortunately, she became very seriously ill with the measles but when she recovered years later, she was a teenager and was allowed to bloom in society. She met the inventor Charles Babbage who became a good friend and introduced her to his invention, The Difference Engine, which was like a large calculator.

This machine and the design for  The Analytical Engine would change her life. Babbage’s Analytical Engine is considered to be the world’s first computer design and Ada worked on the algorithms for the punch cards to be used in the machine. She programmed the machine using Bernoulli numbers! Ada had the imagination and forward thinking to see a world of potential in Babbage’s invention; she saw endless possibility in programming.

If there was one thing I’d change about this book, it would be how Ada’s parents’ relationship is described. From what I understand, Lord Byron could be very uncaring and at times abusive to his wife. Reading this book, one would think that Lord Byron was simply “wild” and Anne Isabella Milbanke much too proper, strict and overprotective of Ada.

The illustrations in this book are gorgeous. Robinson’s art is detailed, delicate and fanciful. I can’t imagine how many hours she spent painting and cutting paper to create the 3D images. I love how light the watercolors are on the paper and how much depth she achieves by propping up and layering the cut-outs. My favorite spread is of the giant cotton mills with smoke streaming out of them against a blotchy gray sky. So pretty!

Ada’s Ideas is a beautiful tribute to Ada Lovelace’s life and will definitely inspire young children to dream high. Whether you dream in words, numbers or paints & scissors, let your mind soar and discover what you’re capable of!

P.S. I love the punch cards on the end papers, the cover of the book and on the title page! So cool. 🙂 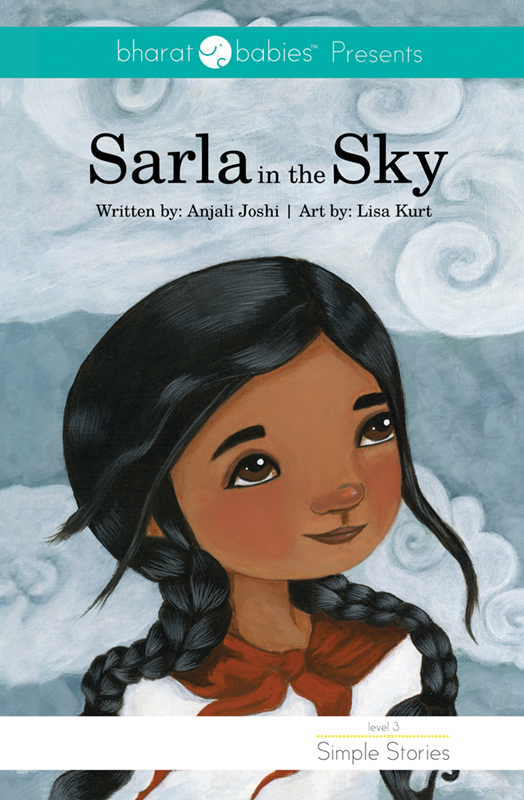 In the United States, Amelia Earhart is considered an inspiration and hero. The first African American female pilot, Bessie Coleman, isn’t very well known and until I read this book, I didn’t know about Sarla Thakral, India’s first female pilot. This simple and pretty beginning reader will teach readers of all ages about her and will perhaps inspire them to learn more.

In this story inspired by Sarla Thakral’s life and accomplishments, Sarla dreams of flying like the birds. When she’s a little girl, her best friend Prem reminds her that girls cannot fly but she’s inspired by a caterpillar to make her dreams a reality. As she grows up, she’s persistent despite the discouragement of others. She tells her critics that wings are not just for boys and continues on her path to the sky. Sarla finally gets her pilot’s license at age 21 and becomes India’s first female pilot. Like the caterpillar from her childhood, she grows into a courageous butterfly. 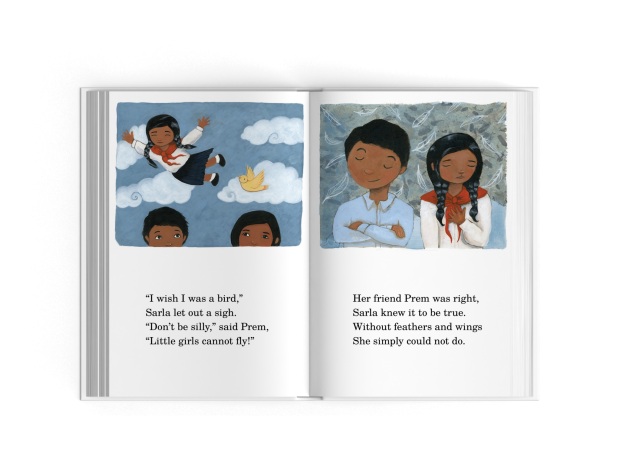 I enjoyed this story but it would’ve been just as good if not better if written in prose, not verse. There were some rhyming lines that didn’t quite work. That being said, I can see children enjoying this book as a read aloud. Lisa Kurt’s paintings are very pretty and I love the scene where Sarla day-dreams in the tall grass. I also liked discovering little details in her art like the use of a map of India for the butterfly’s wings.

It’s not often we get quality stories, especially in picture book or beginning reader format, that discuss Indian girls and women. This book is also important because it’s about a girl who loves science and mathematics. Sarla in the Sky is a great addition to any collection and I hope it inspires children, especially little Indian girls and boys, to dream big and fly high. 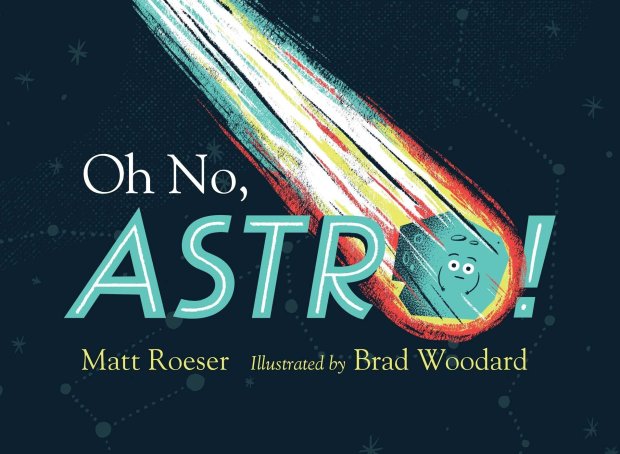 What a blast this book is!

Oh No, Astro is great for kids who love astronomy but also enjoy a fun storybook. Astro is QUITE the character. If you think ALL asteroids like to bump and bang into each other, you’re wrong! Astro is all about keeping his personal space intact; he likes his comfy solitude, thank you very much!! But one day a happy little satellite lurks closer and closer until BAM! it knocks him off orbit and before he knows it, he’s on the fast track to Earth!

What initially drew me to this book is the art (and my friend’s enthusiastic recommendation); Brad Woodard’s style reminds me of Dan Yaccarino/Bob Shea/Bob Staake and if you follow my blog, you know that I adore their art! Bold and cute at the same time, the digital illustrations really stand out and are well designed. I love the cover!! Astro is so cute with his polite surliness; he has the best annoyed expression and his little arms are so expressive.

Oh No, Astro has so much potential for the classroom and can boost an Astronomy lesson. At the end of the book, Roeser includes helpful (and very funny) space facts that really enhance the story. If a child has a question about asteroids, the planets featured in the book, etc., answers can be found on these pages. This is a cool little book and I hope your family or classroom will jump right into this space adventure! 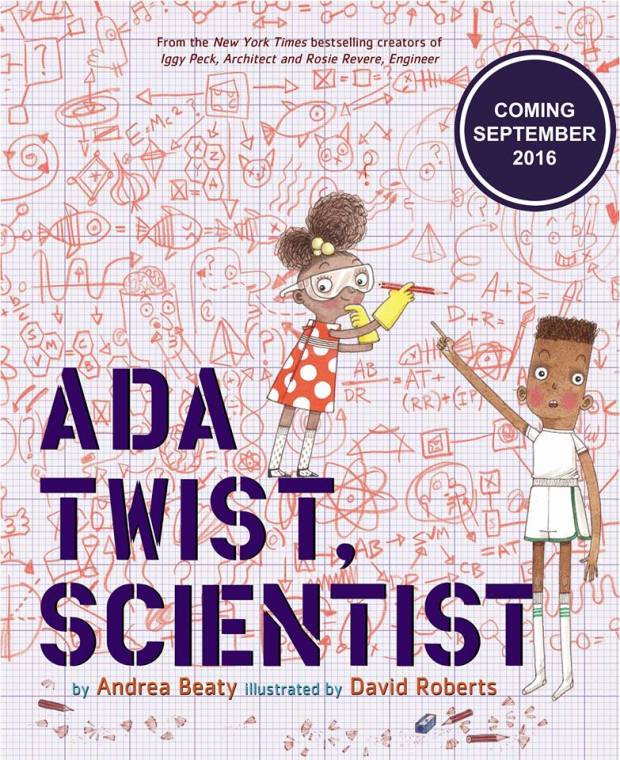 Look at that pretty cover!

Because I love diverse books and because this book features a girl of color who loves science, I shouted for joy when this cover released!

BUT PEOPLE…ADA TWIST HAS BEEN IN THE SERIES ALL ALONG! (GASP)

And this is a beautiful thing. Today I noticed her sitting quietly and playing joyfully in Ms. Greer’s class along with Iggy Peck and Rosie Revere. We’re getting to hear Ms. Greer’s students’ stories! Here are the first two books in the series: 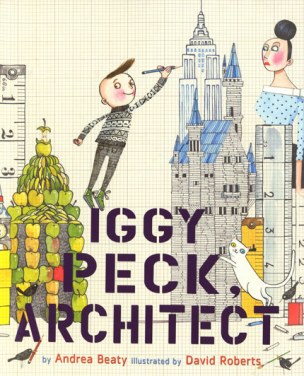 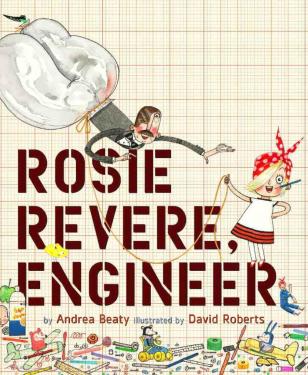 And now we get to learn more about Ada Twist this September!

I shared my delight in this “discovery” with the author of these books, Andrea Beaty, and she told me this:

“I wrote ROSIE REVERE, ENGINEER because I was curious about the shy kid with the swoopy hair in IGGY PECK, ARCHITECT. I wrote ADA TWIST, SCIENTIST because I was curious about the kid in the red polka-dot dress who stands scratching her chin and thinking while everyone does other things. I knew from that illustration that she was a thinker. David’s characters lead me to stories and then those stories lead him to complete the world which, in turn, inspires me. It’s fantastic fun!”

I love it! ❤ We continued to have a discussion about how the creative process of a book is multifaceted. She also said that art directors and editors play a big part in shaping how a story comes to fruition. I think it’s clear that lots of love has gone into this series and the response of families, students and readers around the world has been wonderful. People love these two creative kids and I can’t wait to meet Ada Twist! 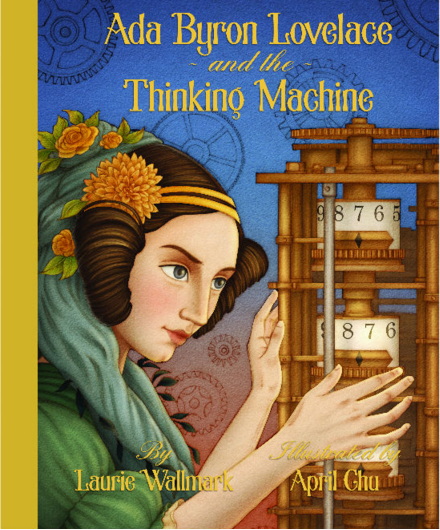 Ada grew up outside of London and away from her scandalous father, the poet Lord Byron. In the country, she explored, expanded her intelligent mind and loved to sketch machines based on nature. She even invented a flying machine and spent hours on the calculations! On a stormy day she went out to do an experiment by her pond but as a result, she developed a serious case of measles that left her paralyzed and blind. Determined to stay sharp, she continued to diligently work with numbers with her mother’s help. Her sight would come back but she was on crutches for 3 more years.

As a teen, she had impressive female mathematician and scientist tutors like Mary Fairfax Somerville and would befriend Charles Babbage. He designed an Analytical Engine, a mechanical computer, but never built it. Ada worked on this project for months and used her impressive knowledge of numbers to design a set of “instructions” for the machine, an algorithm; the world’s first computer program! She was ahead of her time. The author of this book, Laurie Wallmark includes an excellent Author’s Note with more useful information about Ada’s life and in general, does a great job in this book explaining science and history in an easy way for children to understand.

April Chu has a very distinct style of illustration. Her detailed pencil illustrations are colored with computer and the colors she uses are very rosy, golden, dark and warm. Her characters have straight noses and expressive eyes and she does an excellent job of recreating Victorian England. Chu has an “aerial shot” in her illustration that she uses in this book to take us inside of Ada’s room; a glimpse inside her world of imagination, numbers and calculations. This is my favorite scene in the book.

I highly recommend this biography. If you don’t already know about Ada Byron Lovelace, you really should. She’s an important contributor to not only history but modern technology!