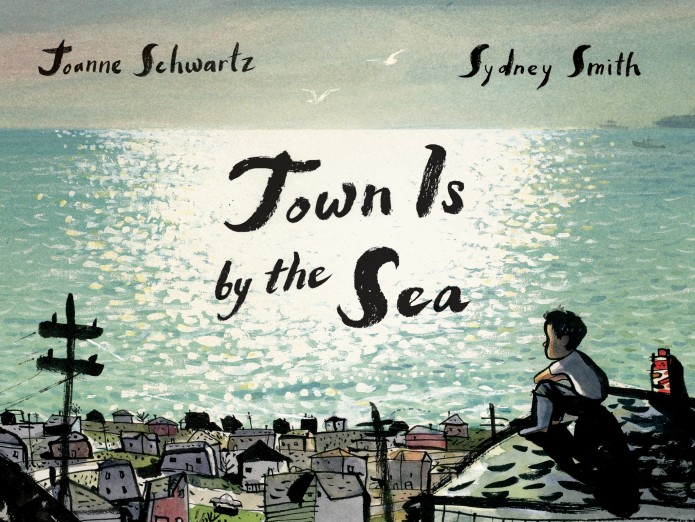 Coal. Here in the United States, we have a long history with the fossil fuel. Americans have been burning coal for hundreds of years and mined it heavily from the late 19th century until the mid 20th. Towns developed around coal, generations of families (of various ethnicities) mined it & depended on it. Though we don’t mine and burn coal like we used to (due to mechanization of mining & increasing natural gas usage), we still have deep, emotional ties to it.

Town Is By the Sea is a story of the Canadian coal town Cape Breton in the 1950s and a boy’s connection to coal, to the sea and to his family. This story has multiple layers; on the surface level, it’s a boy’s account of his daily life. But on a deeper level, Joanne Schwartz paints an intimate portrait of a coal mining town and a boy’s understanding of his role as a miner’s son.

From early morning to night, we learn the details of a boy’s day in his sea town. The repetition of the line “it goes like this” is comforting; he jumps right into telling his routine. As he goes through his day, the boy is constantly focused on the sea. He repeats the line “And deep down under that sea, my father is digging for coal.” As he swings high on the swing set with his friend, he can see the sea (and his father). On a slow walk home from the grocer, he can see the sea (and his father). He’s connected to the salty air, the sparkling ocean and the black coal underneath (where his father labors day after day). The boy’s father comes home safely every day and he knows he’ll be in his father’s place, one day. This type of slow, reflective story isn’t every child’s cup of tea but that’s ok; the rhythm is perfect for a quiet story time.

Schwartz’s straightforward and reflective writing is beautifully accompanied by Sydney Smith’s ink, watercolor and gouache illustrations. With a palette of mostly greens, grays and blues and his signature black line, he creates a strong since of place. Wide, detailed spreads fill in the story where words don’t; I love the inclusion of a few wordless spreads. The pages depicting the deep, dark mines are almost completely filled with an inky, almost oppressive gray-black. It feels heavy. At the very bottom of these pages, the men are hunched over in a sliver of brown earth; in one scene, there’s even danger. Throughout the story, the boy brings us back to the mines; we experience the powerful spreads over and over, each time slightly different. We’re also brought back to the sea above the coal; Smith’s gray and green waves are dappled beautifully with white highlights. The contrast is striking. The sea changes with the weather, the light on the waves changes at different times of day..but the mines don’t. The lifestyle doesn’t.

This is a gorgeously thoughtful book. It covers topics children can relate to; hard working parents, the feeling of relief when a parent comes home from a dangerous job, responsibility, tradition and the comfort of routine, family and friends. I get the impression that Town Is by the Sea is getting a lot of love from adult American readers partially because it evokes nostalgia for “The American Working Middle Class.” This is the story and history of many North American families.

There are so many amazing lines and scenes in this book. My favorite scene is where the boy sets the dinner table. Mother is at the sink, finishing up dinner and father stands just behind her, his arm across her back and hand gently on her hip. We only see the couple from the waist down (the focus of the illustration is on the dinner table) but this small detail is very sweet.

There’s much to discuss and celebrate in this book. I hope you’ll take time to slow down and enjoy this gem.

P.S. Take off the jacket of the book for another beautiful view of the sea. 😉

One thought on “Town Is by the Sea”