Native American Heritage Month just ended here in the U.S. with constant reports of aggression and violence towards Native peoples at Oceti Sakowin Camp. Snow has fallen on the camp and the water protectors are still standing strong against the Dakota Access Pipeline. I’ve noticed, through media coverage of this situation, that visibility of Native peoples has risen somewhat. When children see Native people standing strong and united against a pipeline that will affect all of us, that helps fight ignorance & combats racism. Stereotypes of Native people are still very pervasive and harmful.

Contemporary stories about Native people, especially written by Native people, are important “mirror” books for Native children who simply don’t see enough of themselves in books. These stories are also vital tools in classrooms full of non-Native children. That’s why Mission to Space is so important; it’s a non-fiction book, written by Chickasaw astronaut John Herrington, printed by Chickasaw Press. Author Zetta Elliott often talks about the importance of community-based publishing and this is a perfect example. 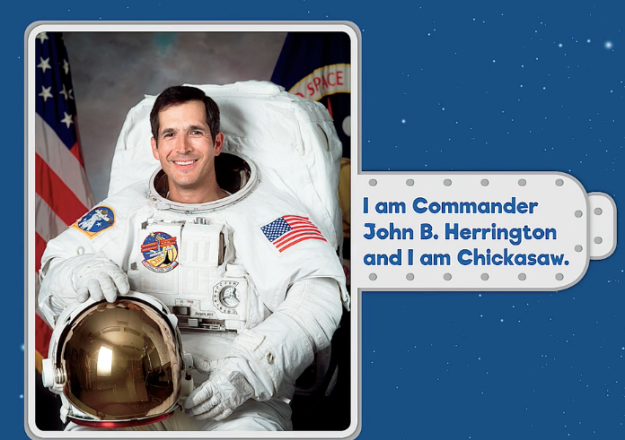 In Mission to Space, Commander John Herrington takes us back to his roots as a boy who loved shooting rockets with his dad and brother. Years later, he’d grow up to be an astronaut on the shuttle Endeavor! In this book, simple but effective text is accompanied by vivid photographs. Herrington explains how much work it takes to do something well and in his case, to become an astronaut. That’s an important lesson for children. When he was launched into space, people from his nation came to celebrate; he was the first tribally-enrolled Native person to fly in space!

Children who love science, astronomy and languages will get a lot out of this book. Not only does Herrington give readers a behind-the-scenes look into what it takes to become an astronaut, he talks about how important language is for Chickasaw identity and provides a glossary of space terms in the Chickasaw language. I hope you’ll check this book out!

P.S. Visit the book’s website to see a cool video and take a look at Debbie Reese’s glowing review.