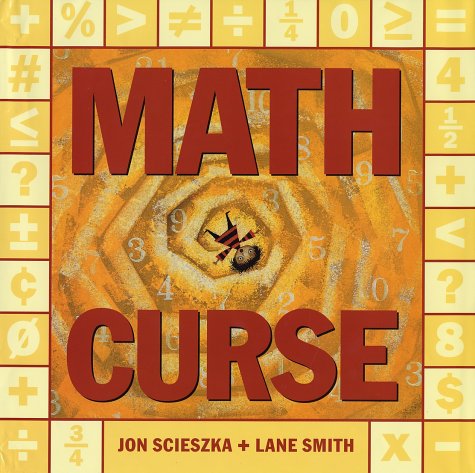 To celebrate 40 POSTS on Read It Real Good, I invited my good friend Nida to write about one of her favorite books. I met Nida while teaching English in Korea and she is particularly great with languages and linguistics.  I didn’t know about Math Curse until she started raving about it BUT I do love Jon Scieszka and Lane Smith, or as I like to call them, the 90s Picture Book Dream Team. You might be familiar with their classics The True Story of the Three Little Pigs and The Stinky Cheese Man. Welcome Nida and please enjoy her review:

Have you ever sat in a class (or meeting) and stared at the clock, counting the minutes, pondering and planning the rest of your day? If the answer is yes, then welcome to the Math Curse.

Math Curse opens with Mrs. Fibonacci telling her students, “You know, you can think of almost everything as a math problem.” One girl discovers just how true those words are as she wakes up the next day to find that everything around her makes her think in mathematical terms. The reader follows her thoughts throughout the day where she can’t help but regard everything in her daily routine as a problem to solve, including her other subject classes. Despairing that she’ll never escape the math curse put upon her by her math teacher, she finally solves the ultimate math problem (with the help of a clever little pun) that frees her. She learns that although math may be everywhere, it’s no longer something to dread.

Math Curse is one of my favorite books ever. I love books that are designed to make you think, and this book definitely does that! But it’s not all about the math. The book is also filled with clever wordplay that will appeal to any little linguists out there. The best part is that this book can grow with a child. I first read it when I was 8, before I knew what the Fibonacci sequence, binary numbers, or the quadratic formula were. When I finally learned about those things in middle school, I remembered the Math Curse, went back to read it again, and appreciated it on a whole new level. Even as an adult, I am often plagued by a math curse as I try to figure out how to do everything I need to do within the hours of the day. Talk about a book for all ages!

This book will obviously be a hit with anyone already interested in math or language, but I also highly recommend it for parents who wish to engage their children with an interactive, relatable story. It’s important to understand: It’s not about getting the right answers (which can be found on the back cover, by the way), but rather exercising your brain and challenging yourself to see things in different ways.